Alan Turing named as the face of the £50 polymer note

The Bank of England have announced that computer pioneer and codebreaker Alan Turing will feature on the new design of their £50 note.

He is celebrated for his code-cracking work that proved vital to the Allies in World War Two.

The £50 note will be the last Bank of England note – after the Winston Churchill £5, Jane Austen £10 and JMW Turner £20 – to switch from paper to polymer when it enters circulation by the end of 2021.

Aside from playing a crucial role in securing an allied victory through his work decrypting the German ‘enigma’ code, he was also a pioneering figure in the development of computing.

But Turing’s importance goes beyond science. Shortly after the war, he was prosecuted by the British government for “gross indecency” due to his relationship with another man. He chose to undergo a year of chemical castration rather than face a prison sentence. He died two years later, aged 41.

It wasn’t until 2009 that Gordon Brown issued Turing an apology on behalf of the government. And in 2013 the Queen officially [pardoned him. Turing’s legacy contributes to ever-greater acceptance of sexual differences. Turing’s appearance on the new note has been welcomed by parts of the LGBT+ community as a symbol of a country facing up to the way gay men were persecuted.

“Alan Turing was an outstanding mathematician whose work has had an enormous impact on how we live today,” said Bank of England governor Mark Carney.In late 2018, the Bank asked the public to offer suggestions for the scientist whose portrait should feature on the £50 note. After receiving 227,299 nominations (covering 989 eligible scientists) in six weeks, a shortlist – including names such as Stephen Hawing, Rosalind Franklin and Ernest Rutherford – was compiled and deliberated on before the governor made the final decision.

Vaultex’s work with the Bank of England

Vaultex have been a close partner of the BoE and heavily involved in the Polymer Working Group for the introduction of the new £5, £10 and soon-to-be £20 polymer notes. The prior experience will stand us in good stead to be instrumental in helping the Bank withdraw the 344 million £50 notes – with a combined value of £17.2bn – in circulation currently. 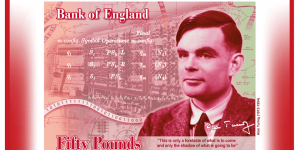